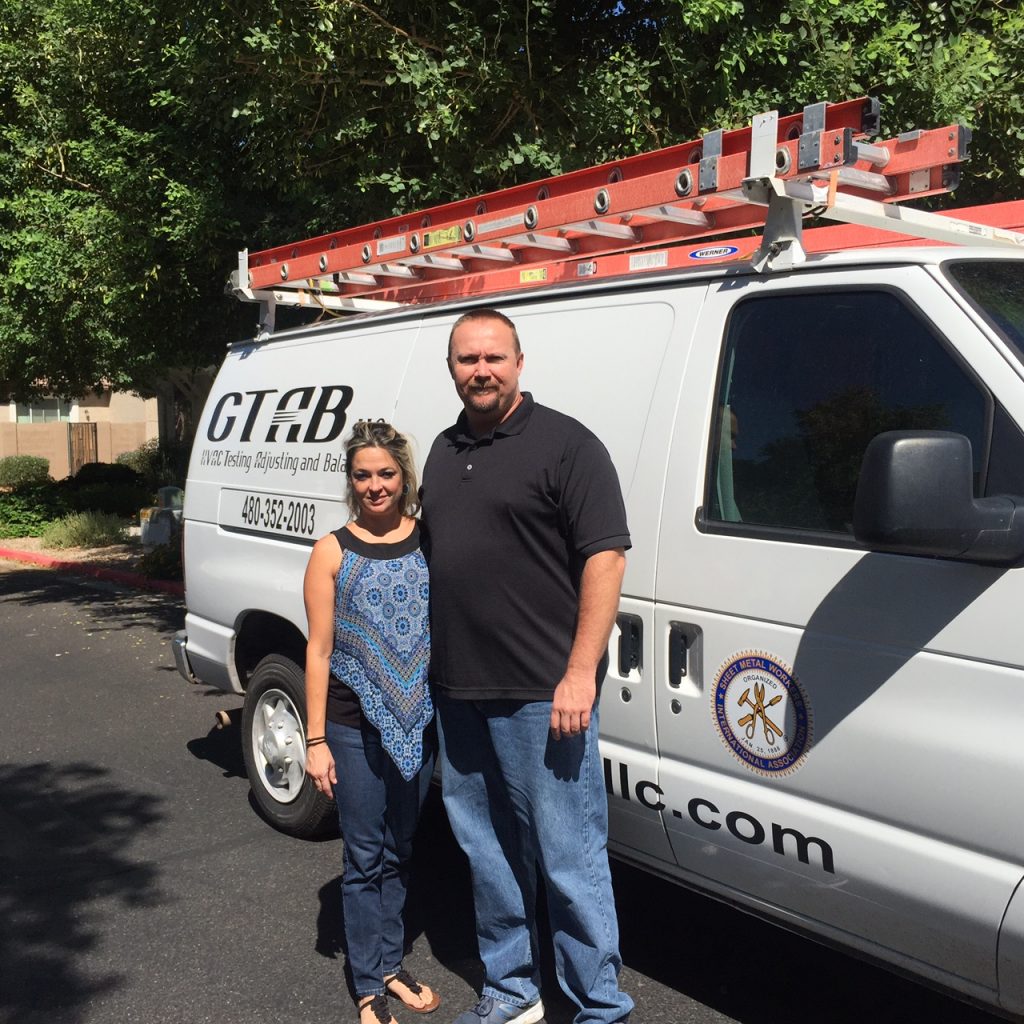 MESA, Ariz.—September 9, 2016– GTAB is an HVAC testing, adjusting and balancing company based in Mesa, Ariz. owned and operated by the husband and wife team of Robert Stewart and Laura Beth Werner.

Since opening its doors in 2015, Robert Stewart—manager of GTAB, llc.– has hit the ground running racking up an impressive array of professional certifications for himself and the company. GTAB is a TABB/ICB certified testing, adjusting and balancing contractor and is also certified in HVAC Fire Life Safety levels one and two.

Stewart started GTAB after a career as an HVAC technician and eventually a superintendent on numerous projects. After some time, Stewart made the decision to start a business himself. Understandably, GTAB’s first project is one that Stewart is particularly proud of—the invoice is framed just above his desk in his office.

“Our first invoice was for Compound Photonics…they rent one of the buildings at ON Semiconductor,” Stewart said.

Stewart mentioned that many systems at Compound Photonics had not run since 1995, and with GTAB’s help, they were able to get these systems up and running for the first time in over 20 years.

Stewart’s numerous professional successes can be attributed to his unfaltering work ethic. Stewart’s wife, Laura, quickly noted that it is not uncommon for Stewart to spend late nights in his home office.  Stewart gives credit to unions as having played an integral role in his career development.

Stewart remarked, “My Uncle Gerry was the business manager for Local 359, my Uncle Jack was [also] a business manager and business agent for 13 years.” Due to these strong Union ties, Stewart mentioned that forgoing union membership was never an option that crossed his mind.

Of particular importance is Stewart’s relationship with his uncle, Gerald “Gerry” Stewart. Uncle Gerry was a tireless advocate for the sheet metal trades, sacrificing his own goal of starting a testing and balancing company in order to continue serving as the business manager for Sheet Metal Workers Local 359.

“We’re built around speed, accurate and honest testing,” Stewart said adding, “I want to be the biggest Union testing and balancing company.”

Speaking to his commitment to Union labor, Stewart stated, “I was born into it, it’s a legacy.”

With such a strong devotion to excellence, and his ties to the unions in Arizona, it is no secret why Stewart and GTAB will have continued success in pursuit of their professional goals.